Our globe-trotting Training Manager, Sean Ong, has been in Vietnam recently on a mission to train employees of MinhAnh TechInfo Co Ltd (MTCL) in Vung Tau, Vietnam. MTCL have a very diverse portfolio of services, with offices in Hanoi and Ho Chi Minh City as well as an office and tool rental business in Vung Tau. The Company prides itself on the high levels of training it provides for its staff and the service it is able to provide for its customers so, having acquired an Enviropeel unit, they were keen to train their engineers in its use.

The training was organised at the Company's RentATool centre with the objective of certifying four Enviropeel applicators. After a week of training and intensive practice, the four trainees were duly certified with very good feedback from MTCL management. 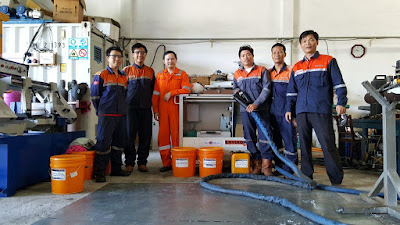 The picture shows Sean (in orange) with the four trainees and their manager during training.

The Company has set up its own specialised anti-corrosion division based on its ability to resolve a wide range of corrosion issues using both Enviropeel and Alocit Systems. MTCL has already used Alocit offshore for Vietsovpetro, a Vietnam/Russian joint venture company with its HQ in VungTau.

With high levels of synergy between its engineering service divisions and its newly acquired anti-corrosion capabilities, MinhAnh TechInfo Co Ltd looks forward to a successful future with Enviropeel and Alocit.
Posted by Unknown at 08:22