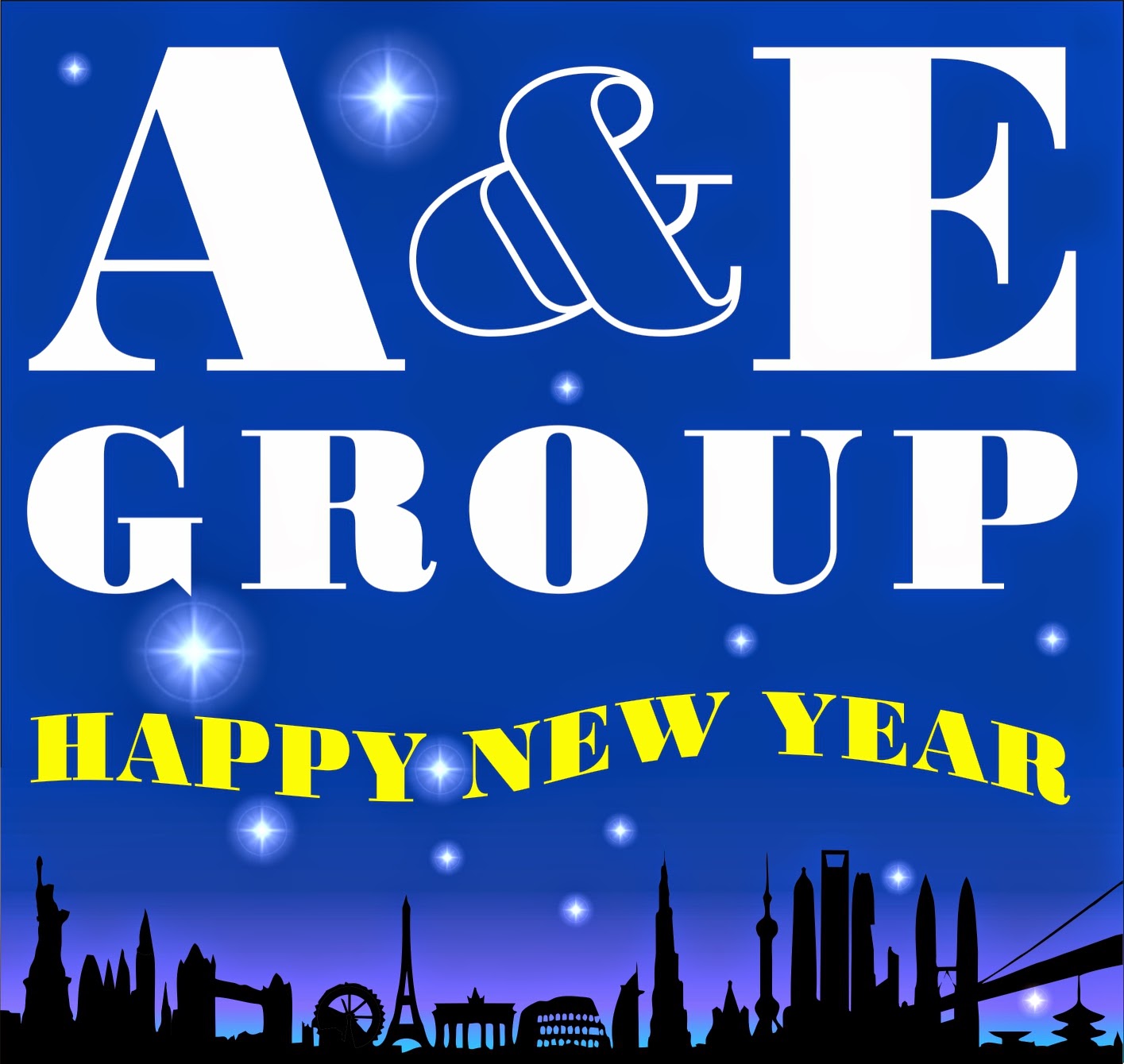 Living as I do, in the UK, the beginning of a new year marks the end of the 'festive season' and is both an opportunity for celebration and contemplation. Even as we celebrate, news of terrible misfortune and war are never far away - and we always hope that the New Year will turn out to be better than the last.

Of course, New Year arrives at other times in different traditions and calendars. In this, as in many things, humanity does not speak with one voice.

Nevertheless, any opportunity to wish for peace, prosperity and universal good will is worth taking and so, together with all my colleagues at A&E offices around the world, I sincerely wish you all a very Happy New Year, whenever it may be!

Tim Davison
Posted by Unknown at 05:35 No comments:

Every day I get emails promising everything I could possibly wish for - nearly always for nothing. All I have to do is supply my bank details and I will be a rich beyond my wildest dreams, achieve amazing success in bed and live until I am a hundred - I know you get them too - we all do. It seems incredible to me that it anyone would believe such implausible lies yet, every week, I hear of apparently sane individuals who have lost their life savings in response to one scam or another.

And sometimes, of course, we are all tempted by the 'Gucci' bag or 'Rolex' that we are offered in markets and bars around the world - it's hard these days to be able to tell the difference between what is real and what is fake just by looking at it.

Which may be okay if all you need is somewhere to stash your keys.

The problem is that fakers don't just make bags, they make counterfeit medicine, poisonous baby products and drinks that will blind and kill you. It doesn't matter to them what happens to the end user, as long as there is a profit in it for them.

SO WHAT HAS THAT GOT TO DO WITH ANYTHING?

Well, I have always been irritated by TV ads that blatantly mislead about the products being advertised: miracle cures for cold symptoms, age-reducing face creams, cereals full of sugar being sold as 'healthy'. Trouble is, we have learned to live with exaggerated claims and try to read between the lines in order to make sensible decisions about our lives.

Nevertheless, we all occasionally opt for the generic brand or the cheaper version that claims to be the same - only to find that it is a complete waste of money.

Now I find myself on the other side of the fence.

Just as Gucci and Rolex have suffered through their customers being duped by inferior copies, we have found that the Enviropeel brand is being abused by a copycat company, using Enviropeel's success to boost its own reputation.

In the beginning, this company became an Enviropeel distributor, bought our products and had personnel trained by Enviropeel engineers. Over the next couple of years it used our material and equipment to obtain accreditation from national companies and establish the credentials of sprayable thermoplastics as a high-performance alternative to standard coatings in the local oil and mining industries.


THE SINCEREST FORM OF FLATTERY?

Then, the owner of the company decided that he could do better without Enviropeel and set up his own organisation to provide a very similar service. Almost immediately, we began to hear stories of Enviropeel accreditations and projects that were being re-branded in the name of the new company. Soon, case histories showing Enviropeel applications were appearing on the company's website purporting to be the work of the new system and we had to take legal action to have a number of documents removed or amended that were using Enviropeel's own photographs and data in support of claims this company was making for its own products. It became so ridiculous that an Enviropeel technical data sheet was reproduced substituting the company's name for Enviropeel - but using the exact same wording, data and design, despite the new company's product having entirely different characteristics. If it wasn't so serious, it would be laughable.

Eventually, most of the material was changed to comply with our request, but some material has lingered on. Case histories with photographs of Enviropeel equipment, an application video showing Enviropeel, information directly cribbed from Enviropeel documentation provided as part of the distribution package. In a way, the fact that the new company could not produce sufficient material from its own resources to support its case became a joke within the Enviropeel community and, perhaps, we didn't take it as seriously as we should.

More recently, however, new lies have appeared. As readers will know, Enviropeel has enjoyed considerable success in the UK power generation sector, providing ingress and corrosion protection on high-voltage switchgear essential to the smooth running of the country's supply network. Not able to achieve the same results, but nevertheless wishing to boast about its own success, a case history was produced by the new company and headlined on its international website - using photographs of an Enviropeel project and claiming the project had been completed by its own personnel.

Presumably, we will be able to persuade them to remove the offending material, but the question remains, why would they do it?

Are they so ashamed of their own products that they have to hide behind the good work of others? Or, do they hope to create the impression that, by claiming all our work as their own, they might blind gullible customers into believing that they have something to offer?

Surely, if the product is as good as it is claimed to be, it can stand on its own two feet?

I don't know the answer to these questions, nor do I understand the motivation for such blatant dishonesty - I can only warn potential customers that they should make sure they get the real thing - Enviropeel!

We touched on mothballing in a previous post, contemplating an Enviropeel-protected future where assets could achieve their full potential, free from the threat of corrosion. We also mentioned that the idea for Enviropeel sprang from the downturn of the 1980s and our CEO, Arthur Haycox's insight into the potential for a sprayable encapsulation system to protect decommissioned equipment from offshore platforms.

The French have some words for it ...

Apart from Déjà vu, which tells us that we have seen it all before, the French also point out that plus ça change plus c'est la même chose - the more things change, the more they stay the same - and it seems they are right. 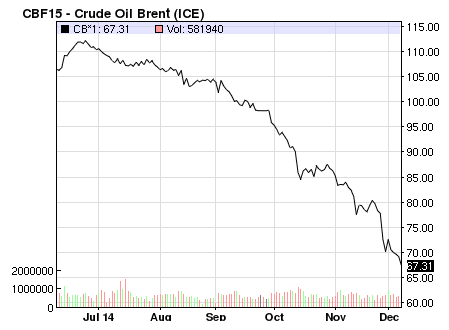 Several news stories recently have been reporting 5-year lows in the price of crude oil, with falls of about 40% in the past six months to below $68. This is close to the marginal production cost of more expensive offshore projects and, as a consequence, drillers and operators are looking to slowdown production by taking the most expensive units offline.

So, as they did in the eighties, platforms are being readied for an uncertain future. Warm stacking is the first phase, where a rig goes in to standby but basic operations are maintained - on the basis that any downturn will be of short duration. However, according to some observers, there is increased talk of cold stacking, a much longer-term process with complete shut down of the least cost-effective production platforms until prices rise well beyond the cost of production. 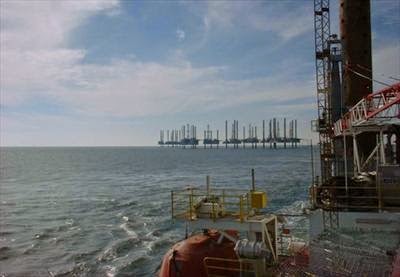 With operational costs of around $30,000 a day for a working platform, a reduction to as little as $2000 a day for a cold-stacked platform is an attractive option. A return to service, however, may be a distant prospect if the platform is not adequately safeguarded against deterioration while out of use.

It is surprising, for example, how quickly pumps and valves become unserviceable if left for prolonged periods of inactivity without protection. As the English say, use it or lose it, or perhaps they should be saying, use it or Enviropeel it! It doesn't rhyme as well - but it makes a lot more sense to protect your assets than let them go to waste. It must be worth a little time and $50 of material to save, for example, a valve that would cost many thousands to replace, especially when there are hundreds of valves and thousands of components on every platform which could benefit from such a small investment.

For more information on Enviropeel and mothballing, go to www.mothballing.net

I was reading through the blog yesterday (someone has to) when I realised that we haven't mentioned Simon's deluge test. Well, that's not quite true, we have mentioned it  - but just a mention doesn't do it justice - at the very least it needs a photo. 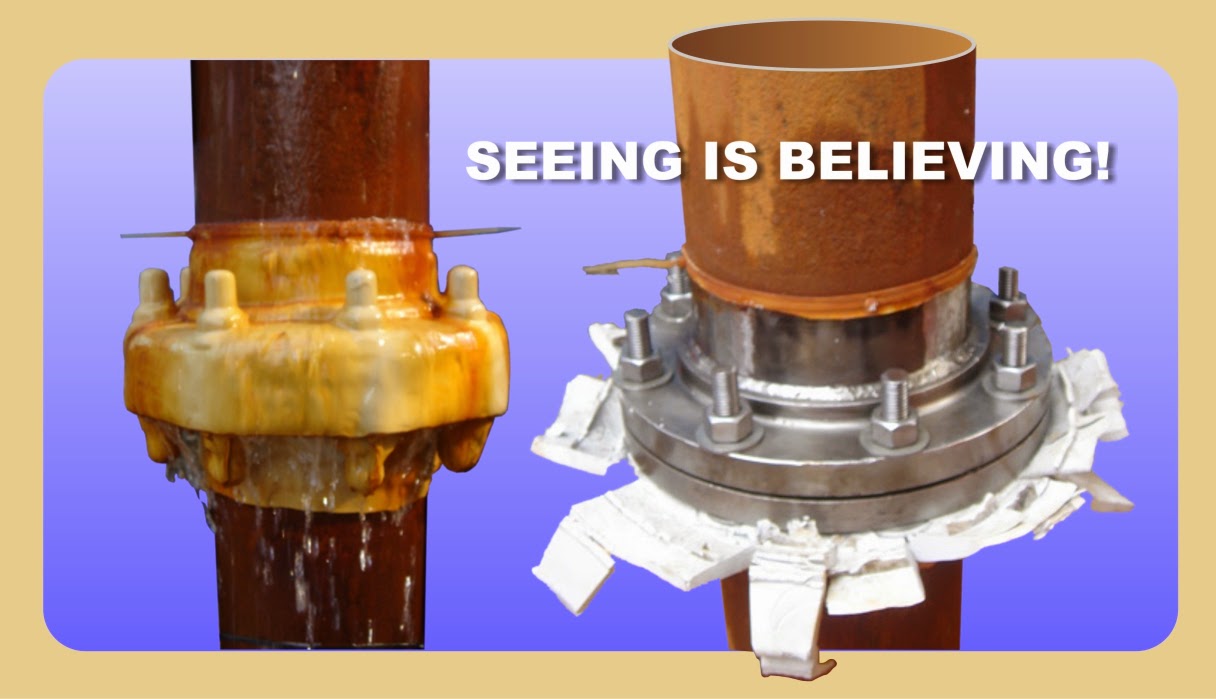 So here it is

The photo shows a brand new mild steel flange and pipe that have been subjected to a 20% salt-water deluge for several weeks, on a 12-hour cycle to maximise corrosion potential.

The test was undertaken some time ago but, as mentioned, I had not put any details on the blog - and it seemed like a good idea to put that right as soon as possible.

Both images are of the same substrate. On the left, salt-water flows down the pipe and around the Enviropeel encapsulation. causing the whole substrate to stream with rust. On the right, opening up the encapsulation reveals just how complete the Enviropeel protection has been. It's a pretty graphic demonstration of how incredibly good the Enviropeel system is at protecting vulnerable steel substrates. For more details one ingress protection you can access 'Enviropeel - Ingress Protection' by clicking the link.