Risers are the pipes that are used for the production, drilling and export of oil and gas from the seabed. They are a key component for the offshore industry and maintaining their functionality is central to the success of the production system. 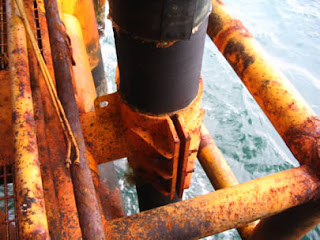 On a platform, the risers have to be secured to the structure using clamps and, while there are many sizes, shapes and designs for the clamps, they share common principals and suffer from similar problems, no matter where they are found. 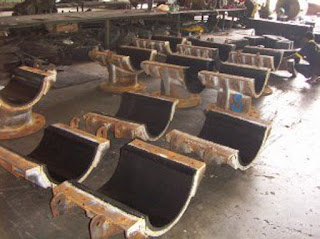 Steel clamps are especially vulnerable to corrosion because of the way they are constructed and deployed. Usually made up from two halves, one of which is connected to the platform by a stub piece, they are hinged and/or bolted together around the riser to hold it in position, as you can see in the picture on the right. Surrounded, as this clamp is, by significant signs of corrosion, it is easy to understand how the bolts and fixings holding the clamp together must be suffering from the effects of this extreme environment.

The second picture shows some disassembled clamp components. Nothing could be clearer from these pictures than the evidence of corrosion around the bolt holes and clamp faces. The main body of the clamp is able to withstand the marine environment but the cavities around the bolts and clamp faces create a perfect micro-climate for the creation of corrosion and, with the galvanic effects on the bolts and nuts, serious deterioration of the clamp is depressingly inevitable.

As you know, we have been working on a solution for corrosion problems in riser clamps for some time and we have spoken about the development of an integrated system in earlier blog entries. Now, with imminent mobilisation plans for riser-clamp applications on behalf of major international companies - and a patent pending on the overall system - it's time to talk more detail on a system that we believe has the potential to revolutionise riser clamp protection.

Enviropeel's great strengths have always been in the corrosion-inhibiting quality of the material and its universal applicability. By moulding itself to any substrate, no matter how complex or bizarre in shape, it has been able to bring active protection to the most inaccessible structures in a way that has never previously been possible. Integrating these qualities into a system that can withstand the rigours of the most hostile marine environments, such as those faced by large offshore riser clamps, has been a long-term objective that has finally been achieved.

The system involves three potential stages with different levels of implementation tailored to match the specific needs of the structure to be protected. At the heart lies Enviropeel and its unequalled protection but, with the addition of a tough self-amalgamating outer wrap, it is now possible to withstand splash zone conditions and even submersion. With the potential for a final coat of marine-growth inhibiting, colour-matched epoxy, the system offers the most comprehensive protection ever provided by the A&E Group.

How the system works

Taking a fairly typical clamp as an example, the illustrations take us through the various procedures. The red arrows indicate the most vulnerable areas of the clamp: voids, exposed bolt threads and fixings. The green arrows indicate the application stages.

First, exposed bolt threads and voids are coated and filled, followed by application to the bolt ends using spray and casting techniques as necessary.

Once the voids are filled and the bolt ends given their initial protection, a first coat of Enviropeel is applied around the joint area and across the first half of one side of the clamp. Then, proceeding around the clamp, all four quarters of the clamp are fully coated.

Once the first full coat is completed a second coat is applied in the same manner around the entire clamp. The second coat is stepped in to allow application of the wrapping system.

The first of the detail pictures on the left shows the step between the two coats.

For complete ingress and impact protection, a full wrap is recommended. Following the stages outlined above, the bolted areas are individually wrapped, followed by a total wrap of the entire clamp. The wrapping tape is self-amalgamating and moisture-cured. Once the curing process has completed, a coat of Alocit, colour-matched to the riser structure can be applied forming a final impenetrable barrier on a system designed to protect the clamp for many years.
Large clamps in the splash zone

For large clamps with complex bolt and hinging systems, the most appropriate protection may not be to encapsulate the entire clamp. As previously noted, the areas most likely to be seriously affected by corrosion are the hinge and bolt areas. With clamps that may be one or two metres high, with numerous very large bolts/studs and nuts, the most appropriate and cost-effective approach may be to encapsulate the bolt section, as shown in the pictures on the right.

Following a similar procedure to those previously outlined, the exposed studs are flooded with Enviropeel between the clamp faces and all the studs and nuts are coated. A coating of Enviropeel is then applied across the bolt area, followed by a wrap coat. As with the whole-system application, the wrap coat can be epoxy coated to provide the final finish.

For areas suffering from marine growth, the final epoxy coat may include an anti-fouling (AF) option. Recently approved by the Royal Navy in the UK, Alocit AF has proved to be extremely effective in reducing marine fouling and, like other Alocit products, can be applied to wet and submerged surfaces.