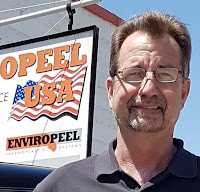 Kenny’s background is in engineering, his companies have designed and built caterpillar-tracked drilling rigs as well as making key components for the production lines of a variety of major industries, including Coca Cola. He knows machinery so, although he was fascinated by the unique qualities of the Enviropeel material, he was also intrigued by the possibilities of equipment development for its application.

Through Enviropeel, Kenny came to know much more about the entire corrosion industry as well as Enviropeel’s sister product, Alocit. It might not surprise you to learn that, when he heard about a paint that could be applied underwater, he thought that was a good idea too, and took a majority stake in Alocit International, the company that makes it.


The only problem with Alocit, for Kenny, is that it doesn’t use specialist application equipment that he can redesign … but you can bet he is working on it!
Posted by Unknown at 09:29